No denial of vaccine, essential services for lack of Aadhaar, says UIDAI

Food has become so expensive in Turkey that some people are spending what money they have to stock up on rice and pasta to avoid swallowing even higher prices in the months ahead.

Parents have switched to discount baby biscuits, the cost of eggs has nearly doubled in a year, and a mock photo is circulating on Twitter in which a man on bended knee offers a woman a can of cooking oil instead of an engagement ring.

“We are buying only the absolute necessary and cheapest brands out there. All food prices are rising but especially baby formulas,” said Huseyin Duran, 43, an Istanbul father of three and security guard receiving partial state pay for lost work.

“I worry about my kids,” he said. “We can only meet our rent, groceries and loan payments.”

In a world of near zero inflation and economic fallout from the coronavirus, Turkey stands out with annual consumer prices climbing to 15%, second only to Argentina among emerging markets and by far the highest in the OECD.

Rising oil and fertilizer prices and dry weather are part of the reason food inflation jumped more than 20% in a year. But economists also point to government policy decisions which saw the lira dive to record lows last year, hiking import costs on some $9 billion in food. 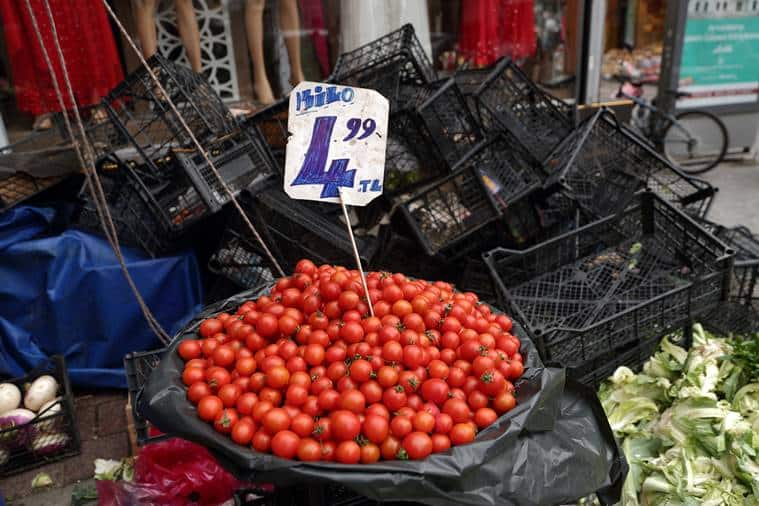 With surveys showing pantries are thinning out, Erdogan may need to do more about basic living costs even after installing a new central bank chief who in November pledged to tame inflation.

One policymaker told Reuters the government expects inflation to be difficult in 2021 and must be monitored.

“Inflationary pressures continue to be high due to the recent rise in global commodity prices and a lagged effect of the sharp lira depreciation,” he said.

A trip to a the market – where eggplant, orange and sunflower oil prices rose more than 50% last year – has become a serious strain for Turks in addition to the pandemic, which has already depressed workers and incomes.

“Every time I fill my pantry the shopping bags get lighter but the bill gets higher,” said Pinar, 31, who declined to give a surname. “I buy in bulk so I don’t have to shop again for three or four months.” A furloughed chef, Pinar gets part of her salary under a temporary ban on layoffs that she says only covers rent and utilities. “I’ve had many sleepless nights (and) in the end I think I’ll be unemployed.”

Hyperinflation dogged Turkey in the 1990s and only ended with an International Monetary Fund programme that tamed prices just as Erdogan came to power in 2003.

Inflation, led by food, jumped again in a 2018 currency crisis and has since remained mostly in double-digits. Economists blame a chronic trade imbalance and costly state FX interventions that depleted reserves.

A Metropoll survey last month showed 80% believe inflation is higher than the official tally. A separate survey by the Deep Poverty Network showed more than half of respondents in Istanbul relied on food handouts from the municipality.

Kemal Kilicdaroglu, leader of the main opposition Republican People’s Party, said the situation was getting worse. “There had not been hunger in Turkey before. But hunger is the reality now.”

In a turnaround, Erdogan in November said even “bitter pills” like high rates were needed to cool prices. Lutfi Elvan, his new finance minister, said he would take structural steps to fight inflation, which is expected to edge higher until April.

The government has several levers it can pull to ease pressure on the public. Ankara has already cut taxes on tobacco, which weighs heavily in the consumer price index (CPI), even while it raised duties on alcohol and road tolls which have less impact on the headline number.

State agencies also set the price of utilities such as natural gas and electricity. Last month the government raised the minimum wage by a net 16% for 2021, to 2,825 lira ($377) a month, in a boost to workers but also to overall CPI.

“Our problem with inflation is too big so we have to take more targeted steps to solve it.”

No denial of vaccine, essential services for lack of Aadhaar, says UIDAI