Farmers’ agitation enters 50th day: A timeline of how it unfolded

The farmers’ agitation at Delhi’s borders has entered its 50th day on Wednesday. The farmers, mainly from Punjab and Haryana, who have been sitting at protest since November 25 last year, have been demanding a complete repeal of the three farm laws promulgated by the Centre, fearing that they would lead to the abolishment of the minimum support price (MSP) guaranteed by the government on select crops and would leave them at the mercy of big corporates.

November 25, 2020: After sporadic protests against the new farm laws, including a nationwide road blockade on November 3, farmers’ unions in Punjab and Haryana gave the call for ‘Delhi Chalo’ movement. The Delhi Police, however, rejected their request to march to the capital city citing Covid-19 protocols.

November 26, 2020: Farmers marching towards Delhi faced water cannons, tear gas as the police tried to disperse them at Haryana’s Ambala district. Later, police allowed them to enter Delhi for their peaceful protest at Nirankari ground in North-West Delhi.

November 28, 2020: Home Minister Amit Shah offered to hold talks with farmers as soon as they vacate Delhi borders and move to the designated protest site in Burari. However, farmers rejected his offer, demanding to hold the protest at Jantar Mantar.

November 29, 2020: In his Mann Ki Baat program, Prime Minister Narendra Modi said all political parties had been making promises to the farmers but it was his government that fulfilled their promises. 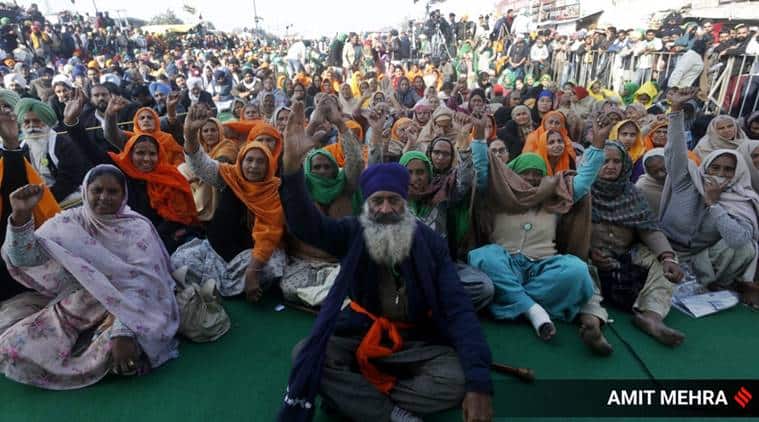 The farmers have been camping at several border points into Delhi since November 25. (Express photo by Amit Mehra)

December 3, 2020: The government held first round of talks with representatives of farmers but the meeting remained inconclusive.

December 5, 2020: The second round of talks between farmers and the Centre also remained inconclusive.

December 8, 2020: Farmers gave a call for Bharat Bandh. Farmers from other states also gave their support to the call.

December 9, 2020: Farmer leaders rejected the Union government’s proposal to amend the three contentious laws and vowed to further intensify their agitation until the laws are repealed.

December 16, 2020: The Supreme Court said it may constitute a panel having representatives of the government and farmer unions to end the deadlock over the controversial agriculture laws. December 30, 2020: Sixth round of talks between government and farmer leaders saw some headway as the Centre agreed to exempt farmers from stubble burning penalty and drop changes in Electricity Amendment Bill, 2020.

January 4, 2021: Seventh round of talks between government and farmer leaders also remained inconclusive with the Centre not agreeing to repeal the farm laws.

January 7, 2021: The Supreme Court agreed to hear petitions challenging the new laws and those against the protests on January 11. This comes even as Attorney General K K Venugopal told the court that talks between farmers and the Centre “may just work”.

January 11, 2021: The Supreme Court rapped the Centre for its handling of the farmers’ protest. The top court said it would constitute a committee headed by a former Chief Justice of India to resolve the deadlock.

January 12, 2021: The Supreme Court stayed the implementation of the three contentious farm laws and set up a four-member committee to make recommendations on the legislations after listening to all stakeholders.