Former MP and national president of BKU Bhupinder Singh Mann, 81, whose inclusion in the committee named by the Supreme Court stoked controversy among farmer unions, has recused himself from the four-member panel.

In a statement, Mann said, “While I am thankful to the Hon’ble Supreme Court of India for nominating me in the 4 member committee to start dialogue with Kisan Unions on the three laws brought in by the Central Government.”

“As a farmer myself and a Union leader, in view of the prevailing sentiments and apprehensions amongst the farm unions and the public in general, I am ready to sacrifice any position offered or given to me so as to not compromise the interests of Punjab and farmers of the country, I am recusing myself from the committee and I will always stand with my farmers and Punjab,” he said. 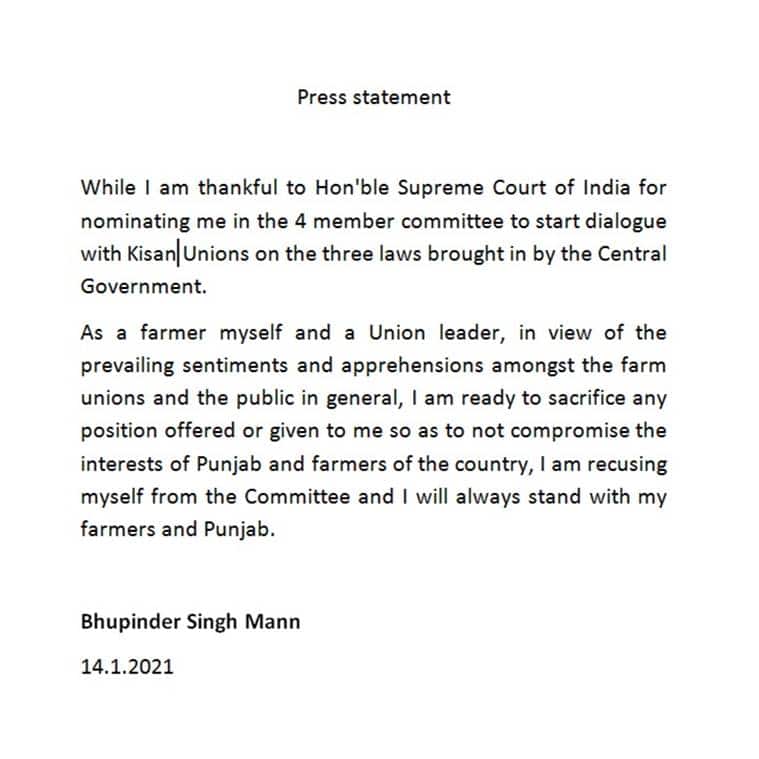 am recusing myself from the committee and I will always stand with my farmers and Punjab,” Mann said.

The 81-year-old is president of the Bharti Kisan Union (Mann) and chairman of the All India Kisan Coordination Committee (AIKCC), which was formed in the early 80s. “I have been active for the cause of farmers since decades. In 1966, I had formed the Punjab Kheti Bari Union, which further took form as BKU in 1980. I was the founder chairman of AIKCC and even now am chairman. BKU was the original organisation and later many organisations bifurcated from it. Now, many BKUs have been formed,” he had said.